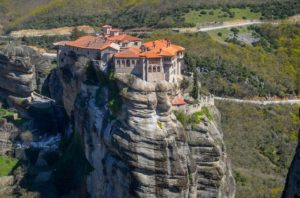 Boasting their high altitude and fierce rock formations, Meteora have been included within the list of UNESCO World Heritage Sites. They are located in Central Greece, in the mainland, attracting worldwide attention. If you are a “Game of Thrones” fan, you have probably made the connection with the Vale of the Eyrie. Fortunately, here there is no Moon Door to throw the enemies of the Valley. But the truth is that George R. R. Martin was inspired by this magnificent landmark of Greece.

Meteora are also referred to as floating monasteries, because of their unique architecture and because they are placed on top of mountainous rocks, just like the icing on the cake. The whole landscape is mystical and the monasteries are cloud-hugged, creating an even more transcendental environment. They are located in Kalampaka, between two imposing mountains, and they date back to the 14th century.

There are twenty four monasteries in the area, but you can only choose to visit one of the six still in operation today. The rest have been isolated and they are uninhabited. So you can take the guided tour that will help you gather a lot of information about the wider area and the pilgrimage. Just remember to wear decent clothing, since there is a strict dress code. Due to the sacred nature of the site, people who enter the monasteries ought to be respectful in every way. Of course, the people in the monastery will help you by lending you a piece of clothing to wear over your clothes, if you do not meet the dress code criteria.

In order to reach the top and access the monasteries, there are carved stairs you need to follow. However, back in the days the experience was much more challenging. It required scaffolding or the use of a net. As you can imagine, the lack of modern or convenient access depicted the hardships of the monks and the isolated nature of the monasteries. Even the most trivial everyday routine became a true challenge for the people living in one of the monasteries, since they had to find a way to overcome the problems related to supplies and weather conditions.

Find the time to discover Meteora, a sacred site in Greek mainland. You will be lost for words, stunned by the majestic beauty of the landscape. It is an experience not to be missed!